Hello My Lovely Virtual Goddesses and Gods! I’ve been spending the last few days wandering about the 2016 SL SciFi Con, and let me tell you, it was a fantastic event!  In fact, I think this year’s SciFi Con was the best one yet in all the years I’ve had fun attending them! This year’s event featured so many beautiful builds I found myself wandering around snapping many photos. As I snapped the photos I started to imagine a little backstory narrative for them, and Bingo!, my next Stories post was born – I hope you enjoy reading it as much as I enjoyed SL living it 🙂

With a last look back at the busy spaceport, the faery entered the short trip transport shuttle. The shuttle would take her to the small cargo ship which in turn would take her on the longer trip back to her home planet. Her dress was federation blue, even though she was a consultant and not a federation fleet member, because she liked to fit in with the rest of the crew. Even her skin would change color with the environment, and right now it was a dark charcoal gray, blending in with so many of the ships’ exteriors, and the darkness of space. 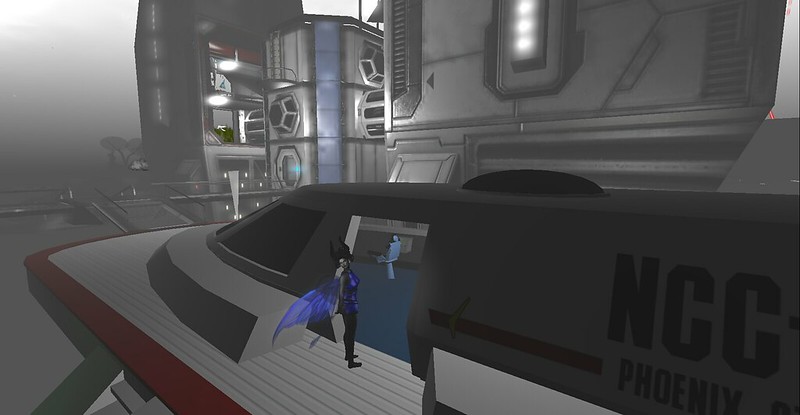 She’d had an exciting 6-month contract with the galactic federation as a private botanic lifeforms communications consultant. The federation sought out her kind – faeries- especially for that task. The fae were one with nature, and much more skilled at recognizing sentient plant life than the humans, and most other species too for that matter. In fact, several sentient plant civilizations had been devastated by federation explorers due to their simple lack of awareness and inability to communicate with the native fauna and flora. Once they finally realized this was happening, the federation made it a point to recruit the faery folk and include them in the crews of their exploration missions.

At first the faeries were, shall we say, not thrilled at the thought of being stuck inside a metal flying contraption for months at a time. But then when the more curious fae finally went along on a mission, and came back with tales of beautiful planets with the most interesting flora and fauna, and described the thrill of meeting alien races, and told their stories about how many lives they had saved because they were able to make contact with botanic beings while the rest of the humanoid crews stood around looking bewildered… well, more and more of her kind were now taking contracts and making trips with the exploration crews.

Yes, it was rewarding to be an explorer after all, she thought. But right now she was just looking forward to being home again, to wiggling her toes in some real honest to goodness terran soil, to speak to the goddess and bask in the sunlight and be one with the forest. There’s just no place like home.

As the passenger shuttle carried her to the cargo ships’s dock, the faery ruminated on the last couple of days, which were spent on the gigantic space port. The space port was so gigantic that the shuttle was really just taking her around to the other end of it, where the cargo ships and deep space luxury liners were docked, and it would take a few hours to get there.  She had been staying in the commerce sector, where tourists and crews on leave would find lodging from rentals above stores to luxury hotels, and all within easy reach of the shopping and entertainment venues.

All that glitz and glam and shopping was fine for the tourists, but the faery spent most of her time lingering in the park modules, basking in the caress of rocks and water, leaves and flowers. She was grateful for the spaceport designers’ efforts to infuse a bit of terran nature into the cold, gray expanse of metal and glass. All that other stuff was more to the humans’ delight – the fae always longed to be immersed in nature, closer to the Great Mother. 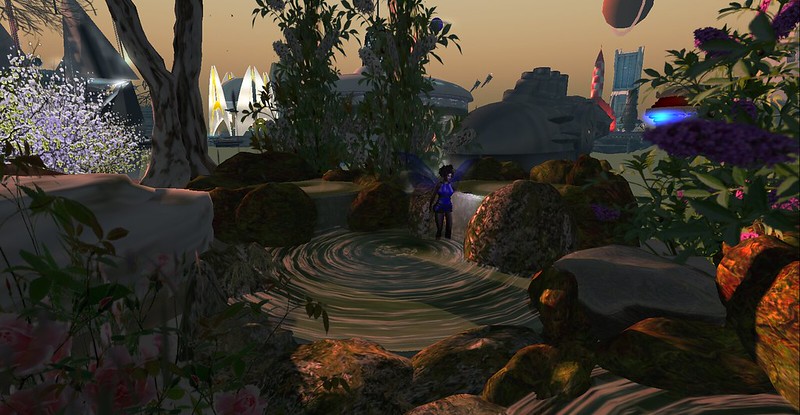 There was one entertainment, though, that the faeries knew well, and that was the holodeck experience. All too often it was beckoning, as if saying “Come, my faeries, come inside and be in your great Forests and Rivers again, soar to the treetops and feel the sunshine on your face.”

The problem was, no matter how realistic the holodeck scene, no matter how intricately detailed each leaf, how real the breezes and sunshine felt on her skin… the spark of spirit was missing. The holodeck scenes were photons and a bit of neural pathway stimulation, and to the humans it was everything they needed, but to the fae, who could feel that spark of spirit in all things in nature, it was a hollow-deck. And yet the faeries could still become addicted if they were very homesick, finding themselves wanting to spend all their free time in the holodeck, even if its nature scenes were devoid of spirit. 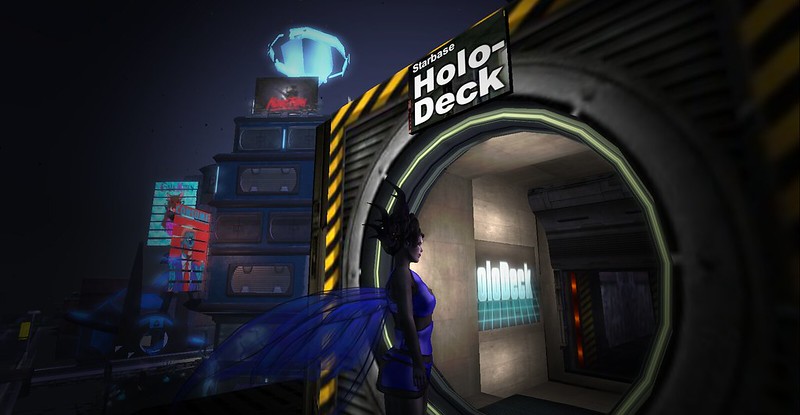 She had come across a holodeck on the space port, and though she was tempted, she resisted the urge to go in. Better to spend her time in the park modules, where the water and rocks and leaves and flowers were real.

…to be continued – Read Part 2 here
———————–
Aaaah my lovelies, there is more of this story to come, but it is laaaaate and I must go to bed lest I faceplant in my keyboard and drool as I sleep there, then wake up with a waffle face and needing a new, dry keyboard. I will try to finish this up in the next day or two. For now, goodnight, and sweet dreams my loves!