Carefully the healer gathered and mixed the ingredients, adding a dash of seafoam, a bit of bark, exactly 3 faery tears, and the rest of what the recipe called for. She knew the potion was ready when it began to emit tiny sparks of magic and a small amount of thick, white vapor.

The faery smiled reassuringly as she released the infected butterflies directly over the sparks and vapor. “Breathe this in, let it coat your wings and bodies, and then sleep on soft flower petals here in the garden gazebo a while. When you awaken, you will be ill no longer.” 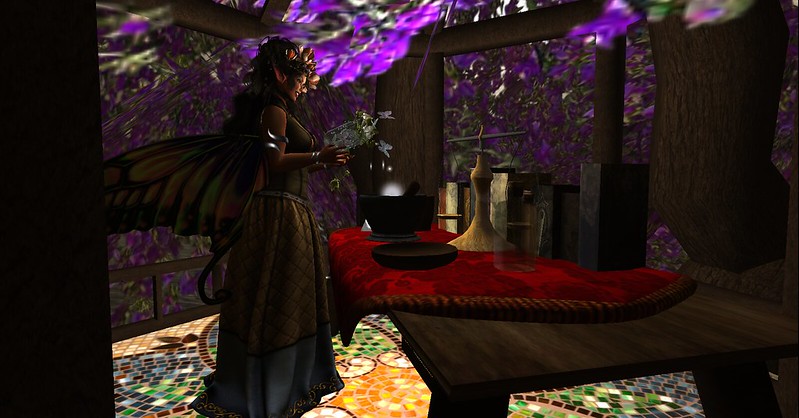 The butterflies dipped their wings in gratitude as they flew out of the jar, and did as she said. They were so lucky to have a faery healer in their forest. The humans would have said “they only live for a few days or weeks anyway” and just let them wither away in sickness and die. They didn’t understand that their short life spans made their lives more precious, not less. The faery understood though, and she didn’t even blink an eye before hastening to make the healing potion.

The butterflies chose the closest flowers so they could share the beauty of their wings with her while they slept. And when they woke, each in turn left a soft butterfly kiss on her cheek before heading off to the island where they would spend the rest of their days.

Can I just say…. SCORE!!  Yep, the beautiful apothecary table in the picture at top is another one of the fabulous prizes from The Renaissance Hunt V! Woot!

And this awesome serving tray shown below was a hunt prize as well. It will give folks the goblet of their choice, to keep and use henceforth. I got a few such trays, and methinks I like the Ale mugs tray the best. They all rock!

As always, click the pics to see them in their glorious larger sizes in my Flickr stream.